Experience the wildlife of Texas, up–close and personal, through the eyes of one of the country’s most talented nature photographers. Award winning photographer Greg Lasley has been taking pictures of wildlife for thirty years. Although he has photographed some of the most exotic creatures and remote places on earth, the Texas Wildlife Portraits exhibit pays homage to his favorite place for photography: his home state.

The image below is a shot of Greg Lasley standing on an Antarctic beach with a rib bone from a whale. Until the 1950s there was still some whaling activity conducted in many Antarctic locations and bones such as this may still be found scattered about in some areas. 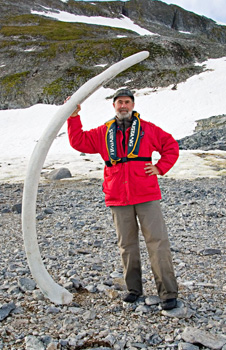 Greg first pointed a camera at a bird in 1977. As a novice, but enthusiastic bird-watcher, he was interested in documenting appearances of rare birds by photographing and tape-recording them. From the late 1970s until the late 1980s, most of Greg's wildlife photography focused on documenting rarities and obtaining slides of birds to illustrate his lectures for Audubon Societies or other nature-oriented groups. In 1988, Greg took some photos of the Golden-cheeked Warbler, an endangered species which nests only in Texas. One of these photos was published on the cover of a birding guide-book, which led to other requests to publish Greg’s bird photos. In the next several years many of Greg’s photos were published in Texas Highways Magazine, Texas Parks and Wildlife Magazine, American Birds, Wildlife Conversation, and a few of other publications. After these initial publication successes, Greg became more serious about his photography. Over the next few years he continually upgraded his camera equipment, developed the skills necessary to become a good wildlife photographer, and traveled the state of Texas and much of the United States photographing birds. Through the 1990s, hundreds of his photos found their way into various publications.

Greg spent 25 years in law enforcement, retiring from the Austin Police Department in 1997 as a lieutenant. Since that time he has concentrated on his photography and tour leading. He has been privileged to lead thirteen trips to Antarctica for Victor Emanuel Nature Tours. All the photos in this display were taken during such trips. His photos appear regularly in a variety of nature and wildlife-oriented books and magazines. He and his wife, Cheryl Johnson, reside in Austin, Texas.

Experience the wildlife of Texas, up-close and personal, through the eyes of one of the country’s most talented nature photographers.

See more of Greg's work in his book