Texas Memorial Museum's saber-toothed cat statue is a gift from Sarah and Ernest Butler, whose generosity has also enhanced the museum's exhibits and educational programs.

The new sculpture was publicly unveiled at the Texas Memorial Museum on Sunday, September 30, 2007. The sculpture was crafted by Texas Memorial Museum’s exhibit artist, John Maisano, who joins a handful of nationally renowned sculptors who have contributed to The University of Texas at Austin's impressive collection of public artworks. This sculpture depicts a large male saber-toothed cat (scientific name: Smilodon fatalis) and is 1.25 times life size. It was cast in bronze by the Deep in the Heart Art Foundry in Bastrop, Texas.

John Maisano holds a Bachelor of Science degree in Fine Arts from Southern Connecticut State University (1989) and has extensive experience in computer arts, renaissance painting, airbrushing and theater set design. His work as a draftsman and construction manager for an architectural firm helped prepare him for a career as a museum exhibit artist. He spent 12 years working at Yale University's Peabody Museum of Natural History before coming to The University of Texas at Austin in 2000. As Exhibit Designer at Texas Memorial Museum, Maisano redesigned the exhibit space in the Hall of Geology and Paleontology.  He is currently the Exhibits Designer for the Jackson School of Geosciences. Maisano’s freelance jobs include a variety of large murals, molded and casted sculptural pieces and fossils, and logos created for a number of corporations and non-profits. He recently completed a larger-than-life-size bronze dinosaur sculpture commission for the Hartman Prehistoric Garden at Zilker Botanical Gardens in Austin.

About Deep in the Heart Art Foundry

Deep in the Heart Art Foundry was established in 1980 in Bastrop, Texas. Over the years, it has earned recognition as a small facility with excellent craftsmanship and a friendly staff. In 1999, the foundry was purchased by Heart of Texas Art Group, Inc. and began a period of tremendous expansion. In 2002, the foundry moved to a larger facility on a 4-acre tract in the Bastrop Industrial Park. Now, with more than 30 employees, clients from around the nation, and plans for a second expansion, the Deep in the Heart Art Foundry has truly become a leader in the bronze casting industry. http://www.deepintheheart.net/ 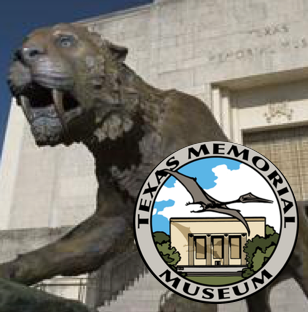 About the saber-toothed cat

It roamed much of North America during the Pleistocene Epoch and went extinct about 10,000 years ago.

It is noted for its elongated upper canine teeth.

It had a muscular body and stood about half a foot shorter at the shoulder than extant lions but was heavier, weighing an estimated 360 to 600 pounds.

From the structure of the hyoid bones in the throat of Smilodon, we know it was capable of vocalizations, perhaps even a lion-like roar.

Smilodon was an ambush predator, stalking its prey and then capturing it with powerful forelimbs equipped with retractile claws.

It preyed on large herbivores such as bison, killing them with shallow, shear-bites to the throat and abdomen.

It may have had a pride-like social structure similar to that of lions (unlike most cats, which are solitary hunters). Healed injuries in Smilodon bones suggest that life was not always peaceful. The cats had to struggle with large prey and may have fought with members of its own species or other predators over food, territories or mates.